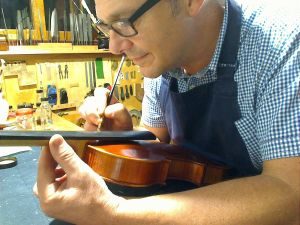 John’s association with the violin started when he began learning the instrument at the age of six. He continued his string studies throughout school and went on to study the viola at the Queensland Conservatorium of Music, graduating in 1988. He has also studied double bass and cello and is still actively performing professionally on the bass.

John has always be an enthusiastic wood worker, and had an interest in combining his skill as a craftsman with his musical experience to become an instrument maker. After graduating from the Con, John started working in the workshop of Lance Scott in Brisbane and during his 2 1/2 years there took on a lot of the repair work and began making his first violin. With a desire to take his chosen profession to the highest level, John entered the Violin Making and Repair course at the Newark School of Violin Making in England. He graduated with Distinction in 1996. During his final year, John was commissioned to make a violin by London’s Royal Academy of Music. That violin is currently part of their collection and is regularly played by students at the Academy.

With a desire to gain further experience and knowledge, John has worked in some good workshops in England and the USA, and he regularly attends professional development workshops internationally, including the VSA’s Oberlin Violin Making Workshop.

Having a retail violin shop in Brisbane, John spends a large quantity of his time attending to instrument repairs and setup for musicians around Australia. He always makes time to produce a number of instruments and larger restoration work each year.

John’s instruments are currently being played in Europe, the USA and Australia.